Siletz, Ore – On Sunday, September 18, the City of Siletz held a ribbon cutting and 3-on-3 tournament to officially open a new outdoor basketball court.  The recently completed court is located next to the city skate park on Swan Avenue in Siletz.

The court was made possible by the generous donation of time by the community and a $12,500 grant from Lincoln County.

Mayor Will Worman led the ceremony and recognized those who coordinated and volunteered many hours to bring an outdoor court to the community. Cody Worden, owner of CIB construction and general contracting, led the project and Joel Stevenson Construction designed the concrete to permanently show the court outline, key, half court and three-point line.

Worden is the uncle of Carter Worden who died in an accident on Highway 229 in August 2018 at 14 years old. Worden will also be designing and installing a bench for spectators as a tribute to his nephew, naming the facility “Carter’s Court.” Carter Worden played football, basketball, and baseball. He also enjoyed riding his dirt bike & four-wheeler and playing survival in the woods. Carter would have been a senior in high school this year.

An inaugural 3-on-3 tournament was held Saturday and Sunday at Carter’s Court. 12 teams from high school age kids to adults competed and raised money for youth activities.

The City of Siletz would like to thank all who volunteered to make this court a reality and who attended the tournament and ribbon cutting. 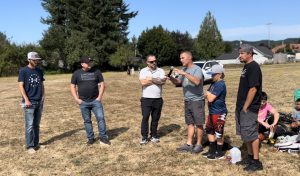 Cody Worden talks about the development of the new court. 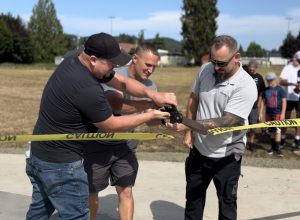 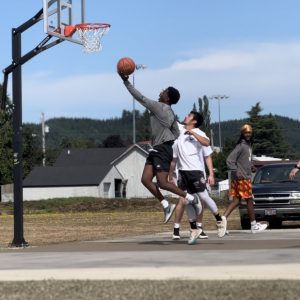 A player stretches for a layup.

Fans watch at half-court on a sunny day during a 3 on 3 game.

A player with a defender shoots from distance on an outdoor basketball court.

Six players compete during a 3 on 3 half-court tournament.